Aurora’s industrial power grids in Tornio and Kilpilahti enable high availability of the customers’ industrial processes. The availability and security of networks in all operations are core values of Aurora and are monitored continuously.

Generally, electricity transmission accounts for about one third of the total price paid by the electricity user. Distribution prices vary by network company. At the time of writing, in October 2019, the average distribution price for mid-sized industrial customers in Aurora’s peer distribution networks (*Distribution volume of 2 TWh or over) is about 14% higher than in Aurora networks. On top of that connection fees, which are often charged from medium and high voltage users upfront based on actual investment costs shall be added. If connection fees are taken into account the advantage is even greater for Aurora customers because there is no traditional connection fee mechanism in Aurora’s networks.

What does a low cost, high reliability network then mean for the customer and the environment?

Energy accounts for a significant proportion of industrial manufacturing costs, for example in the metal processing industry it is ca. 10-40%. Energy availability, price and price predictability are important in comparing investment profitability, as in the international business environment Finnish factories compete for investments with companies located in other countries. Stable and predictable electricity distribution tariffs and avoiding non-core investments in electricity distribution equipment will enhance the competitiveness of Aurora’s industrial partners, increasing the willingness of companies to invest in Finland.

Investments in power distribution infrastructure often competes with company’s other, profitable investments. From the company’s point of view, non-profitable electricity distribution investments are often postponed in favour of other investments, even though they ensure a reliable supply of electricity to production lines. As long as no major electrical disturbance has occurred, the need for replacements may not be recognized but risk levels are rising. In addition, the devices should be energy efficient and utilize modern technologies to avoid additional costs such as electricity loss. This reduces the carbon footprint and usually also total life-cycle costs.

Aurora’s role as an industrial electrical infrastructure partner is to maintain and operate electrical equipment and invest in well-timed renewals. Where feasible improving reliability is often considered. We always make investments taking into consideration the timing and other needs of our customers that are affected by the grid investment. This enables our customers to have a predictable lower-than-average power distribution tariff, a more reliable network serving it, and optimized proactive investments and maintenance works allowing the customer to have the lowest possible downtime for their factories.

Predictability together with reasonable cost and reliability enables industrial processes to be further electrified, which will enable a reduction in emissions when electricity generation uses renewable sources or other low fossil alternatives. High network availability reduces the amount of environmentally harmful events caused by power outages, such as loss of production, material waste or the use of diesel generators, reducing the carbon footprint relative to the production.

Last year, there were in average ca. 4 minutes of disturbances per connection point in Aurora’s networks, while the average for the peer group of distribution companies was 83 minutes and for the transmission system operator 12 minutes. In the most demanding industrial areas, Aurora’s networks constantly achieve under 1 minute per connection point.

Aurora’s mission is to be the leading and most innovative Nordic infrastructure partner serving industrial companies and areas. By providing our partners with a reliable electricity grid at affordable and predictable costs, we also support the competitiveness of Finnish industry and reduce its carbon footprint 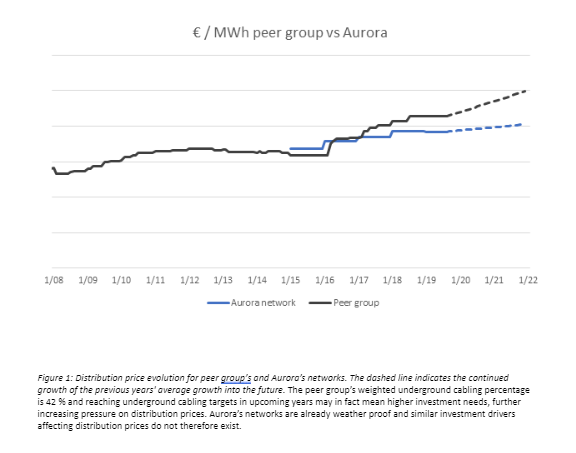